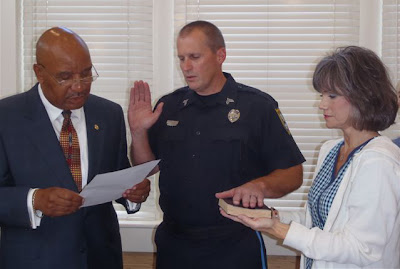 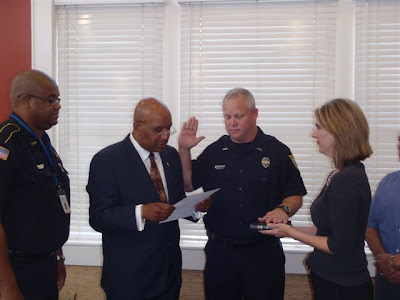 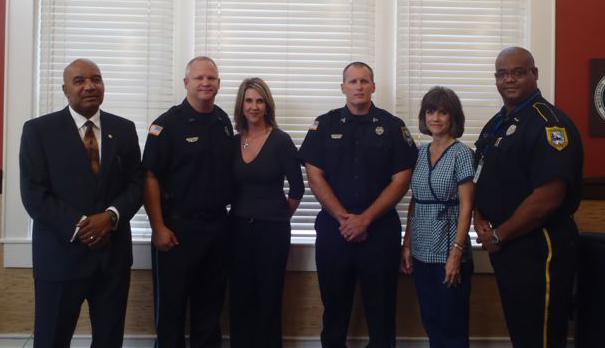 Byron Craft and Chad Bassett took the oath of affirmation of allegiance for Law Enforcement Officers for the State of Mississippi as the newest additions to the Laurel Police Department as Reserve Officers. LPD reserve officers are community members who volunteer their time to fulfill many of the roles handled by full-time police officers. Responsibilities of reserve officers include patrolling and providing a visible law enforcement presence as a proactive measure to help deter crime. As volunteers, the officers can help with work details such as the Christmas parade, Loblolly Festival and sporting events. Work details such as these allow the officers to stay active in the community while bringing valuable experience.
Byron Craft currently works full-time jobs with an oil field service.  Prior, he was with the Laurel Police department since 1999. as a member of the Investigative Division. Chad Bassett began with LPD in early 1994 and now serves as the Director of Security for Howard Industries. Bassett stated that he is “appreciates the opportunity to give something back to the City of Laurel.”
Reserve officers enforce city ordinances as well as state and federal laws.  They also provide assistance to other LPD officers when called upon. Reserve Officers must meet the same minimum standards required for full-time police officers as mandated by the LPD and must possess a Standard Law Enforcement Certification from the State of Mississippi.  In addition, to maintain their state certifications, the officers must keep up with training. This involves a required minimum of 24 hours per year to continuing education.