Residents of Laurel:
Municipal elections are coming up in Laurel, with party primaries on May 7 and the general election on June 4. These will be the first elections under ward lines that the City Council re-drew late last year.
This means that you may be voting in a new ward or at a new polling place, depending on where you live.
Registered voters will soon be receiving their new voter cards. These cards will show your voting locations for city, county, state and national elections. You may find that you vote in different locations for different elections because boundaries are different for city, county and state elections. 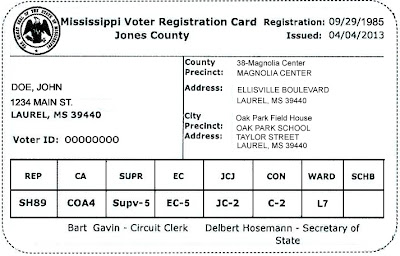 The fact is, if you have voted in a previous Laurel municipal election, you should be a registered voter in Laurel. But make no mistake: No one will be turned away on voting day. If you are a resident of Laurel and your name cannot be found on the voter rolls when you go to vote, you may still vote, by affidavit.
The City of Laurel is taking steps to ensure that you know when and where to vote.
Key dates involving the 2013 city elections
• Saturday, May 4:
Last day to vote absentee in person for the primary election
Last day to register to vote in general election
• Tuesday, May 7:
Primary election; polling places open 7 a.m. to 7 p.m.
• Tuesday, May 21:
Run-off elections for primaries, if needed
• Saturday, June 1:
Last day to vote absentee in person for general election
• Tuesday, June 4:
General election; polling places open 7 a.m. to 7 p.m.