WATER AND SEWER RATE INCREASES BACK ON AGENDA

With dire warnings that Laurel’s aging drinking water and sewer systems face “serious risk” without significant infrastructure investments, the City of Laurel is trying to build public support for a plan that would increase customer rates by 3% in fiscal year 2013. The Laurel City Council vote failed to increase rates by 3 percent (about seventy-eight cents on the average bill) at the last city council meeting on September 4. But in order to continue making repairs to the city’s dilapidated water system, rates will have to increase. The city administration will place the order back on the agenda for the next council meeting. 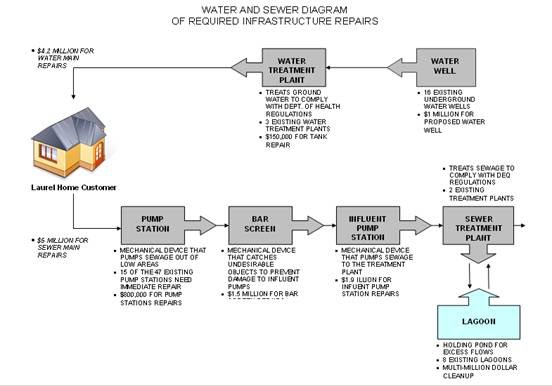 The proposal, which includes rate increases starting in November 1 for water and sewer services, also calls for repairs to support the city’s sewage system, including new pump stations and a lagoon. The rate increase will finance approximately $15 million required for infrastructure repairs in the 2013 fiscal year. City administrator, Dennis Keveryn, said the city does not have any other options to keep from increasing rates.

The water and sewer lines are in such a state of disrepair and they are well over 20 years old. In addition, many of the water lines need to be repaired now to keep from cutting up newly paved streets in the future. “What we are faced with in the next year or so we are going to have to put in a new water well that will cost about a million dollars and other imperative fixes to the system. The city has two near-full lagoons and immediate corrective measures need to be taken.” Keveryn said revenue for the sewer department remained very consistent, but expenses regularly increase every year, leading to a higher need in the sewer department for rate increases to keep the fund balanced and that the improvements are necessary to prevent imminent failures to the system.

6:00am - Mission at the Cross
Event Details