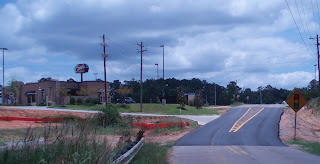 Recently, a repair to a portion of Flynt Road within the city limits of Laurel demonstrates the power of partnership with the Jones County Supervisors. A few months back, a section of Flynt Road was badly damaged and required immediate attention.  It was determined that an effective repair would require more than resurfacing; the entire roadbed needed to be replaced.  The budget for the City of Laurel was already strained by the active replacing of crumbling sewer and water lines, so Mayor Melvin Mack, a former Beat 5 Supervisor, called on the help of some “old friends.” The Board of Supervisors saw the need to get involved and recognized that their help would contribute to a better quality of life for all Jones County citizens.

Beat One Supervisor, Johnny Burnett, took the lead on the Flynt Road project, enlisting the help of Beat Two Supervisor, Danny Roy Spradley, and his road crew. Barry Sauls, Supervisor of Beat Three, was able to supply the equipment for preparing the roadbed for new pavement.  The result was a smooth, well-built road now to be enjoyed in an extremely busy commercial area of Laurel.
According to Mayor Mack, this was not the first time the Jones County Board of Supervisors has come to the aid of the City.  During the past few years, Burnett has cooperated with the City in paving Sandy Lane, just west of Highway 15 N and with resurfacing Northview Drive between N. 5th and N. 7th Avenues.  Spradley was not only instrumental in assisting the City pave Wansley Road, west of Highway 15 N, but also paving the parking lot at the Senior Citizens’ Building and Daphne Park tennis courts.  Supervisor Sauls also had a hand in the aforementioned projects.
Beat Four and Board of Supervisors President, Andy Dial, orchestrated the purchase and hauling of over 750 tons of sand used as top dressing for Laurel-area sports fields from Vossburg, MS, according to Parks & Recreation Director, Elvin Ulmer. “Supervisor Dial enlisted the help of the different supervisors to make that happen.”
Laurel’s Public Works Director, Shedwick Jones, recently petitioned Beat Five Supervisor, Jerome Wyatt, to assist with a project which required placing culvert in a two hundred foot length of a large ditch on Airport Drive.
These projects are examples of the power of sharing funds and manpower from the county that contribute to the quality of life for the community as a whole, in addition to creating a tremendous savings to the City’s budget.
Mack voiced his appreciation for the Jones County Board of Supervisors, “Although Supervisor Andy Dial’s beat does not include the City of Laurel, as President of the Board of Supervisors, he has been very accommodating and a pleasure to work with.  In a lot of communities, because cities and towns have their own tax income and many times work to solve their own infrastructure problems independently, competition between municipal and county governments emerges.  Fortunately, our relationship with the County is one of cooperation.
With the national economic downturn impacting our local economy, it is certainly reassuring to know that our county officials share a sense of cooperation with the City so that all citizens of Jones County get the most for their tax dollars.”