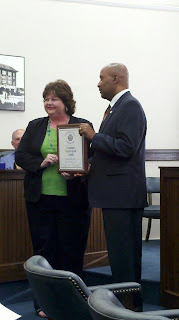 Laurel City Clerk, Mary Ann Hess has earned the designation of Master Municipal Clerk (MMC) and was acknowledged by Mayor Melvin Mack and the Laurel City Council.  The International Institute of Municipal Clerks (IIMC), Inc. grants the MMC designation only to those municipal clerks who complete demanding education requirements; and who have a record of significant contributions to their local government, their community and state. In Mississippi, Hess is the only the fourth person to earn the MMC distinction.

“I am very excited because of the struggle it took to receive this designation of Master Municipal Clerk. I would say it was a lesson in perseverance. Although the application and verification process was not easy, it was well worth it.”

Hess has worked as the City Clerk and Finance Director for the City of Laurel since February 2000.  Previously, she was the city clerk for five years of Greenville, MS that at the time was the third largest city in the state.  In addition to her duties with the city, Hess is active in her church, First Baptist of Laurel and serves as a regent in the local chapter of the Daughters of the American Revolution.

Hess is also very involved on a state-wide level. She served a one-year term as City Clerks’ Association President with the Mississippi Municipal League (MML) MS Municipal Clerks & Collectors Association and currently is on the Board of Directors. She served a two-year term as president of the City/County Manager’s Association. Hess believes in putting into action what she has learned and bringing that knowledge into the office in which she serves.

Hess said her educational accomplishments and achievement of this milestone did not come easy.  In light of the speed and drastic nature of change these days, lifelong learning was not only desirable, it was necessary for her to keep pace with growing demands and changing needs of her office.  “I learn something new each and every day,” Hess explained. “The public may present a new problem and it’s up to our city clerks to figure it out. The laws are constantly changing. It is my responsibility to stay on top of those laws and be able to help the citizens with finding the answers.”